Sherwin O’Bar gave an end of the year summary. 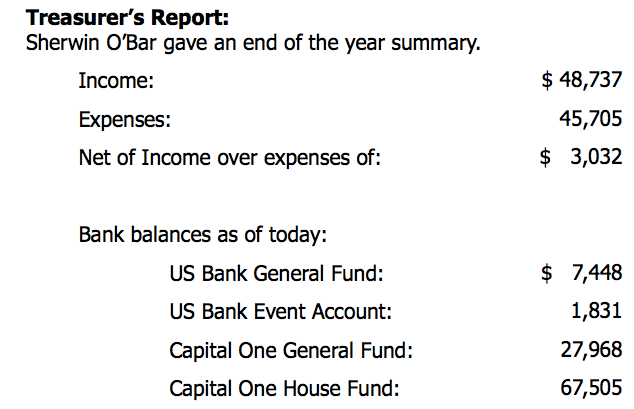 Ramon reported that Seattle is having a general meeting at the end of the month during which an new chair and a new committee will be elected. The year was wrapped up with a shortfall of about $4,000. Seattle is about to draw up and sign another contract with the independent contractor that does the Airb&b Rentals. The shortfall was due primarily because Seattle spent about $12,000 repairing an upstairs bathroom. “Crash doors” were installed; strips were put on the insides of the doors so that people could get out in a hurry. Also, plumbers will be coming in towards the end of January and that agreement, for $10,000 is signed. An initial one third deposit was made; Seattle has three months to pay.

Camille reported that Portland had to cancel a meeting last Sunday and possibly this coming Sunday because of the weather. They are working on their Climate Change workshop which will take place on Saturday, February 11th. Lusijah (Marx), who just returned home, will give a talk about Ruanda as part of the health care training for PTSD for trauma. Marilyn just got back from India. She will give a slide show at a later date.

Camille had planned to continue as Chair but it doesn’t look like she will be able to do that.

Michael reported Skagit Valley is going to do a workshop in marbling. They will set it up once a month and the first one for the year is the coming Saturday, January 14th. The Bird Walk is progressing. After the Bird Walk, there will be a full dinner and, on Sunday, meals will be provided for any Board members coming for the Regional Board Meeting. Michael was asked by the group to remind the Region that it promised to rent a van so he got prices. He can rent a 14 person van for $150 before taxes so it will probably be around $175. He asked that responses be sent to Rismiwati Reynolds for bookings. Regarding house repairs, one bid

has been received and they will get a couple more after the Bird Walk.

We probably have about 15” of snow on the ground right now. Aaron thought it would be about 6° tonight. It’s been a chore keeping up with the snow, keeping the driveway and the sidewalks clear, and the street cleared . . . . It’s all good. We need the snow.

Aaron reported he would wait before deciding if the Board Meeting should be postponed because of the weather.

Isadora reported the helpers talked about the weekend of the Bird Walk and the Board Meeting. They will have a Helper meeting to plan for the year but might not go to the Bird Walk. Oswald stated that for those who were snowed in there is an email link for the twice monthly phone-in latihans so they could still do latihan with at least one Regional Helper, if not other members, to make up for the time of being locked in and perhaps stir crazy and testing would be available.

Oswald, who has been working to try to help the National Committee lock down the location for the Subud USA National Congress, reported that Mary Wold was waiting for the census to be completed by, primarily, the Subud Greater Seattle women. Ramon reported that the update used for the annual census of all the isolated members is complete.

The first order of business, brought up by Aaron, was the Arts Camp. After a meeting last Saturday between Oswald, Aaron, Amelia, Michael and Alexandra, and Virginia (Dodson) Bowers, the contract was signed and $300 was deposited. The date for Pilgrim Firs is confirmed. The dates are August 24th through 27th.

Aaron asked if anybody wanted anything put on the Regional Board Meeting agenda. He noted that:

testing will be done for a vice-chairperson.
A non-interest or interest loan to the Seattle Center for bathroom plumbing improvements will be discussed.

Oswald spoke about the PNW website. Apparently, there has been a problem with a Word Press widget and people were added to the list who had not asked to be on it. These people reported to Alexandra, who manages our list, asking to be taken off. The issue was what if new Subud members in Subud PNW actually want to receive that weekly email blast from the server? How do we get their names into the list? We haven’t really come up with the process to do that so far. We need to have a way to add people to the list. For now, all you have to do is email Alexandra ter Horst. She will add you to the list.

The last thing Aaron had planned to talk about, regarding new business, was about the Bird Walk. Michael had already given us a report on that. He spoke about a meeting they had planned to have before the Bird Walk and Aaron thought they could skip the meeting unless there was a reason to reschedule it. Aaron asked if they had decided to charge a fee to ride in the van. The answer was they would just charge a flat fee, $45 a person and the Region promised to cover the cost of the van.

A motion was put forth and seconded. Did the Region want to support Bellingham’s bird walk? There was a discussion. Sherwin reported $140 could be given to Bellingham for the bus. It could be a Regional Committee expense out of the general operating account. An amount less than $200 could be paid for. So the motion was carried that the region was to give Bellingham $140 to rent a van for the Bird Walk.

Ending the Meeting: Michael made a motion to adjourn, seconded by Ramon. All approved and the meeting was adjourned. Aaron stated he would be in touch within the next two weeks regarding the Regional Board Meeting.