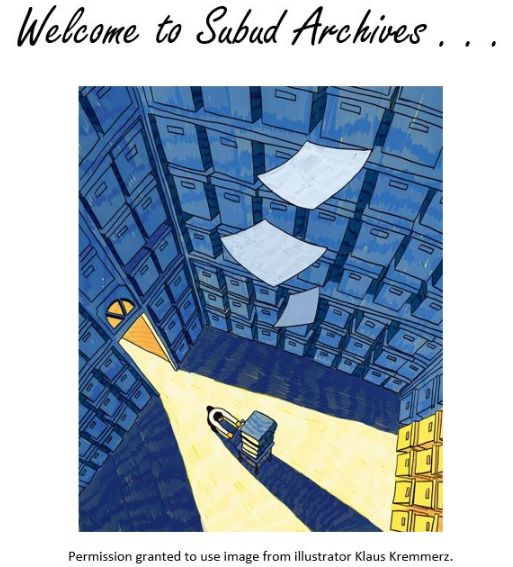 Now you can do better and more precise searches on the Subud Archives Online Database. The database was launched in July and is only a few months old. With new software capabilities just installed, you can now do an every-word search on the entire database including many Subud newsletters, books, reports, documents, photos, films, and other material that we have on the website. Here is the opening page of the Archives Database. Even though the database is small (about 1,000 records at this time) new records are added every day. You can find very interesting historical information.

Let’s say that you are a German Subud member and you are writing the history of Subud Germany or let’s say that you just want to see if your name appears in the database. If your last name is Cadera, here is how you can do a search. Enter a term in the Search Box, for example, put your name, an event, a year, a place, a subject – whatever you want to see in the database – and press Enter or click on the symbol for a magnifying glass at the end of the Search box, and see what comes up.

Here is what comes up for the name Cadera – all the records in the database that mention this name. At this time, we have records for Roland, Heinz, Café Cadera, Lillian, and Clara Cadera. The head of this family, Roland, appeared in an article in the first issue of the Subud World News, Vol. 1, No 1 (August 1967) about enterprises. Roland also appears in a record about the forming of SKM (first Subud World Bank), in Germany in 1971. The bank later moved to Indonesia and became Bank Susila Bakti. Roland also appears in several other records and photographs about Wolfsburg. He had a Café there that members frequented including some Americans like Lavina Lagana (she is photographed dancing in the café with other German members). Lavina made a film of the 1966 Subud North American Congress in Santa Monica, California. You can view this film and many other Subud films, videos, and interviews of Subud members, and films of Bapak on his many World Journeys, as well as reports and photographs of some of our international and national congresses. These films and interviews of Subud members can be shown at your Subud centers at gatherings and social events for Subud members only.

Photo taken at Café Cadera at a gathering in Wolfsburg, December 1964 (donated by Viktor Boehm)

Heinz Cadera comes up in the search as he made the hour and a half movie of the 15th Subud World Congress in Freiburg in 2018 with the help of many other Subud members and his family, Lillian and Clara Cadera. You can see this film on the website. Heinz Cadera dedicated the World Congress film to the sisters and brothers who could not come but who somehow were there . . . This film can be shown in your Subud Centers on a big screen by connecting to the archives’ website. See also the Briarcliff World Congress and the Skymont Congress films as well as many others from around the Subud world. 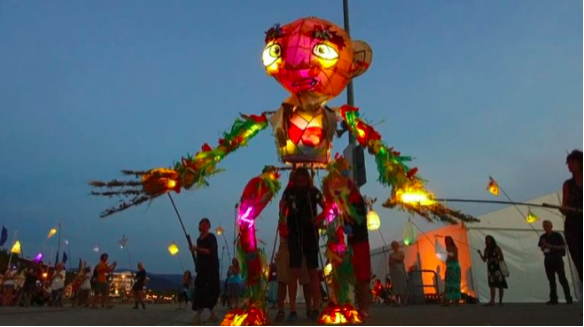 Searching the archives’ database for the name Clark brings up twenty-one records of books, articles, and photographs about Ibrohim Clark. Roanna Clark, Lukman Clark, Matthew, Kenneth and Fatijah Clark (a Memories of Bapak interview of Kenneth and Fatijah is available on the website as well as an interview with Roanna). One record that came up on the search was a short article, among other things, that Roanna Clark submitted to Subud Voice in December 2007: 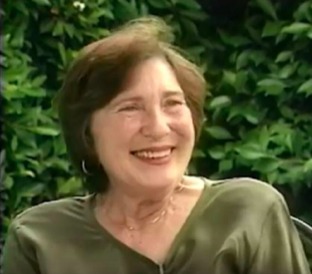 Roanna’s Memories of Bapak interview was made in October 1995 in Los Angeles; in it, she describes her opening in New York in 1959 and Bapak’s stay in Washington, DC. 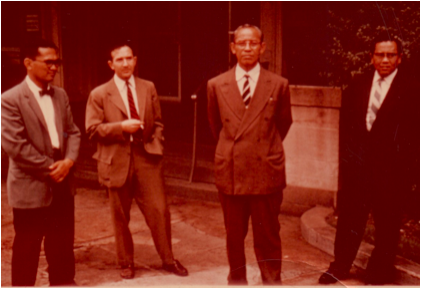 After her opening in New York, Roanna traveled with Bapak and his party to St. Petersburg, Florida to help with arrangements and she open people along with the Bapak, Ibu Siti Sumari, Ibu Rochanawati, Dr. Zakir and wife Retna, and John and Elizabeth Bennett. In these early days sometimes large groups of people were waiting to be opened and occasionally newly opened members with clear receiving were made helpers.

On Bapak’s 2nd World Journey, which started on 27 February 1959 and ended on 27 April 1960, he visited 36 countries. On the North and South America branch of his tour, Bapak gave an unrecorded talk in Florida which you can read about on the Archives’ website in Subud Chronicle, Vol. 2, No. 8, August 1959, pages 130-131. Roanna Clark was on this trip to Florida. On the rest of Bapak’s tour, had given seven recorded talks in New York, three in Washington, DC, and previous to his visit to the East Coast, he had given four talks in Canada, six in Lima, several in Buenos Aries that were not recorded, three in Santiago, another three in Lima, two in Caracas, and two in Mexico.

These visits to the various Subud cities around the world inviably left evidence of Bapak’s visits in the form of notes, memoirs, photos, films, and tape recordings. Bapak attended many national congresses on his tours. We need to collect these records for the history of Subud and for members in the future who will want to know everything about Bapak’s work here on earth and the early days of Subud.

Many Subud groups around the world, including the countries and cities Bapak visited are celebrating their 60th anniversaries. Historical material about the beginnings of Subud groups around the world can be found on the Archives’ database website. If you have historical records about your national or local groups, please share them with the Archives. Email admin@wsaarchives.org about your donation of material or how you can help collect it, and how you can fund the archives to keep this archives project going.

To gain access to the Subud Archives Online Database, write an email request to admin@wsaarchives.org. A Request for Access form will be sent to you, fill it out, and return to the email address. In the meantime, you can get a preview of what kinds of records are available on the website and how to find what you are looking for by clicking here for a short video tutorial about the website: https://youtube.com/embed/ZelCFWwpnSI
In Subud, as in other major organizations, we have to remember that an organization who doesn’t save its history, will end up with no history. This saying goes for the many countries that make up the Subud organization.